Having spent my first full day here, I feel qualified to start making some sweeping, half formed observations. Far be it from me to keep them from you: 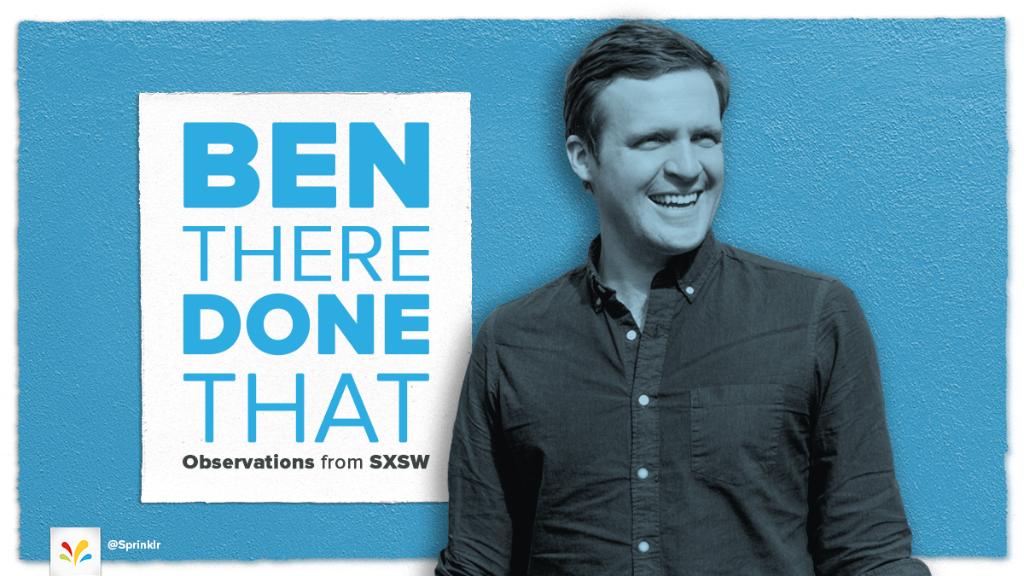 I’m more of an AirPods guy

A morning panel titled “Inside Big Tech’s New ‘Human’ Aesthetic” featured plenty of insights into how our relationship with tech is shifting. Carly Leahy, Co-Founder & CCO of Modern Fertility and a veteran of Google and Uber, pointed out that humans have always defined themselves by their technology choices (e.g., a few decades ago, some people preferred PCs, others opted for Macs). Fast forward to today: with so many apps, smart devices, social networks, and everything else, we have the power to curate our tech consumption to a precise degree.

The primary takeaway? Our tech consumption decisions say something about who we are, whether we want them to or not. “We’re starting to be more discerning about the tech we let into our lives because there are so many options,” Leahy explained. “We form a curated version of ourselves.”

Are brands the new newspapers? (Should they be?)

With 13 years of experience at Wired magazine (several of which were spent overseeing the outlet’s entire editorial output), Robert Capps knows how to tell a powerful story. In his current role as Head of Editorial at Godfrey Dadich Partners – which builds new ways for brands to communicate and reach people in the broken media and advertising world – he works to establish a wide range of companies and outlets as trusted storytellers.

It’s a huge opportunity, he says, as the media industry continues to fracture and big outlets narrow their focus to a few choice topics (i.e., Apple products, Facebook controversies, and you know who). Brands are in a unique position to share their expertise on the important themes that are getting lost in the shuffle.

He pointed to a few compelling examples. AirBnb runs a travel magazine that appeals to travelers who may have an itch to see the world, but don’t have a massive budget. Mattress maker Casper publishes a magazine about sleep, and messaging platform Slack has a publication about the future of work.

There’s a common thread that connects these editorial projects: through their products and services, all three companies have attained the the right to share their view on their respective topics. They have, as Capps put it, “permission to talk about them.”

Capps also explored the pros and cons of running sponsored content in well known publications like The New York Times or Forbes.

On one hand, he said, a brand can “borrow the credibility and authority” of the outlet and explore a topic in more detail than it could in a 30-second commercial.

On the other, sponsored content always features that pesky “Sponsored Content” label, and what’s more, when a brand borrows an outlet’s credibility, it also borrows its audience. That is, sponsored content generally doesn’t allow brands to build their own native following.

Stephanie L. Smith, digital and social media supervisor for NASA and its Jet Propulsion Lab, helps bring the agency’s work to the earth-bound masses. “We’re in the business of sharing wonder and awe, and making sure people know what’s going on with their space program,” she said at a Sprinklr-hosted panel  about how companies and organizations in highly regulated industries can harness social media.

Smith discussed some of NASA’s methods, which include posting from the 1st-person perspective of different robots and rovers, and incorporating pop culture references into posts that tout incredible engineering feats.

Ingrid Kibler, Head of Global Social Media at Trend Micro, also weighed in on the importance of tense. Her company’s field – data and cybersecurity – doesn’t exactly lend itself to a warm and personable social media presence. To establish a more human voice, the Trend Micro social team uses “we” and “us” as well as “you” and “your” in its copy, in order to sound conversational and relatable. It also revamped its collection of imagery to feature actual human beings instead of computer and other, sterile corporate equipment.

It requires a lot of hurry up and wait. “You go as fast as you can to develop a post,” she said. “And then it goes through compliance for a while.” Swanson and her team navigate this tricky landscape by sticking to a strict content calendar and tiering posts in terms of priority.